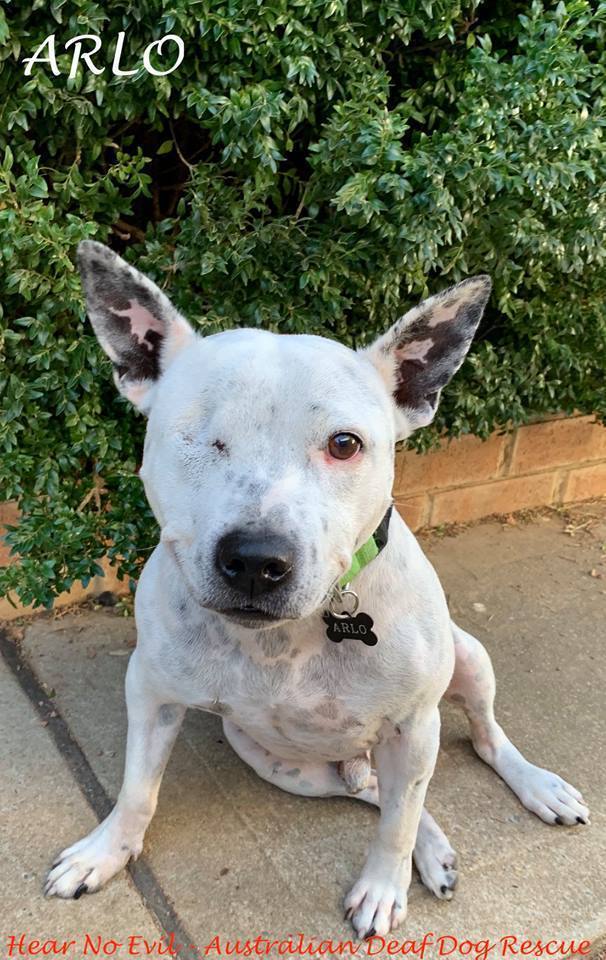 Arlo has quite the story to his HNE rescue experience…

Early last year HNE found out about a little old English staffy in a regional pound. The pound staff thought he was deaf but they were also concerned about damage to one of his eyes that was swollen shut (the result of a beating prior to being dumped). Fast forward through the hoops, loops and other challenges we went through to get this old boy into care with HNE, including establishing he’d been stolen years before he’d been dumped at the pound, tracking down his original owner and obtaining legal surrender from his owner who didn’t want a ‘broken’ dog returned to him.

We trekked interstate, collected the ‘broken’ staffy, named him Arlo and immediately fell in love with one of the sweetest old dogs we’d ever had the pleasure of encountering, let alone saving and fostering.

Arlo settled into care wonderfully and we had his permanently damaged eye removed, eliminating the pain it was causing him. The beating that destroyed his eye also impacted his hearing to a degree, but didn’t leave him entirely deaf. During this time we also had a series of x-rays done on Arlo’s legs and determined that he’d sustained multiple breaks to his legs in past years that had healed badly and were the cause of his limping. There was nothing that could be done to rectify his not-so-perfect hearing or his wonky walk.

The adoptive home we found for Arlo last year misunderstood the concept of ‘forever’ and when his adopter chose to prioritise a new relationship over Arlo, he was dumped in a shelter. This was despite our adoption contract specifying that if a dog can’t stay with the adopter, they must be returned to HNE. We were contacted by the shelter he was left at and made another long trek interstate to get him back to safety again.

But don't be sad for Arlo, as it didn't take him long to capture another heart and has settled in with his new Mumma and is enjoying life of adventures. In a weird twist of fate, Arlo's new Mumma is serving in the Australian army. His previous adopter used to be in the Australian Navy....we don't expect there will be any chance that he will ever experience life with someone from the RAAF, he has found his final home.

Arlo has had one eye removed and has some hearing loss.